One of the most popular tourist destinations in the world, Bali for few years awarded as the world best island by The International Travel Magazine. There, however, are still many people who do not know in depth about the uniqueness of Balinese culture. Life in Bali is always related to Tri Hita Karana or a tripartite concept that include the spiritual relationship between human and God, and their environment.

The rapid growth of development in tourism has had a big impact and influences to Bali tradition and lifestyle. Interestingly, Balinese culture is still as what it was, growing along with the of lobalization. It is the Balinese civilization what makes the island different from other destination.

Among 17,500 islands across the Indonesian archipelago, Bali is one of the 33 provinces of the Republic of Indonesia, the largest archipelagic country in the world, made up of 2,000,000 km2 of land with a chain of islands stretching over 500,000 km from Sumatra to Papua, and covers territorial waters of more than 5,000,000 km2. 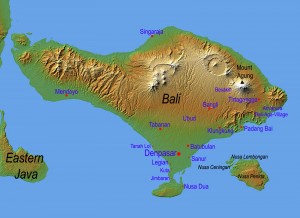 Situated between Java and Lombok, the island of Bali is located 8 to 9 degrees south of the equator with the Java Sea to the north, the Indian Ocean to the south. Bali’s covers an area of 5,636 km2 or 0.29% of Indonesia, measuring just 90km long the north-south axis and less than about 140km from west to east.

The topography of Bali is formed by a mountain chain that stretches from west to east splitting the island into two parts. Some of the volcanic peaks are active, including Mount Agung, 3,142m, the tallest point above sea level, and mount Batur 1717m. Some barren peaks include mount Merbuk, Patas, Seraya, Prapat Agung, Klatakan, Sanghyang, Mesehe, Musi, Lesung, Tapak, Adeng, Pengiligan, Catur, Penulisan and mount Abang. The north side of the mountain slopes is fairly steep, creating narrow lowland along the coastal area. Meanwhile, the south slopes are much leaner, forming a fertile plain that becomes the main center of Balinese culture. Some of the most beautiful white sandy beaches are in the south, including Sanur Beach, Kuta and Nusa Dua. The south slope also is home to four lakes, i.e. Lake Buyan (367 hectares), Lake Tamblingan (115 hectares), Lake Beratan (376 hectares) and Lake Batur (1,605 hectares).

With sunshine shining throughout the year, Bali has a tropical monsoon climate, with pleasant day temperatures between 20 to 33 degrees Celsius or 68 to 93 degrees Fahrenheit. Rainy season starts from October to March, when the West monsoon brings heavy showers and high humidity. June to September is considered the driest season, with low humidity and it can be fairly cold in the evenings, the best time for any outdoor activities. 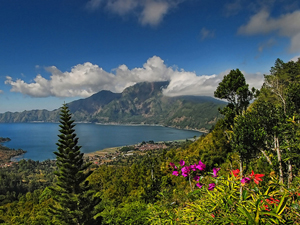 Something unique can be found about climate in Bali. Even when it rains most times in the most parts of Bali you can often enjoy sunny days on the “Bukit”, the hill south of Jimbaran. On the other hand, you may expect cloudy skies and drips throughout the year in Ubud and the mountainous areas. Most interestingly perhaps, the international weather reports for “Denpasar” or “Bali” mention showers and rain storms all times of the year. In higher regions such as in Bedugul or Kintamani you’ll expect to wear either a sweater or jacket when evening falls.

Bali’s population of over 3,000,000 souls spread over the whole island, including those in the smaller islands of Nusa Penida, Nusa Ceningan, Nusa Lembongan, Serangan and Menjangan Island. The overwhelming majority of Balinese are Hindus, with the increasing number on non-Hindu migrating from the closest neighboring islands of Java and Lombok.

The coastal areas in the south are the most populous area with over 370,000 people living in various professions in the capital of Denpasar. Farming has been the primary way of living in Balinese life. Where else fishing, trading and craftsmanship are also in fashion from generation to generation. Yet with the fast growing of tourism since past few decades, young people start to build up a new touch in their living culture. 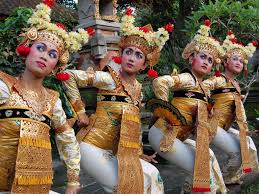 Life in Bali is very communal under the organization of villages. Temple ceremonies, marriage, cremation, farming and even the creative art festivals are decided by the local community institution called “Banjar”. The responsibilities in the day-to-day life are normally administered by both the Banjar and the government. The local government mostly responsible for schools, health clinics, hospitals and roads, and Banjar is responsible for all other aspects of life. There is another association exists in the banjar named “Subak” that concerns to the production of rice and organizes the complex irrigation system. Every family who owns a rice field must be a member of their local Subak, which then ensures that every member gets his fair distribution of water. A banjar consists of an average of 50 to 150 family members, owning a meeting venue called the Bale Banjar, which is used for regular gatherings and a center for local gamelan orchestras and drama groups.

How to get to Bali

With the increasing number of direct flight to Bali from some other parts of the world, it makes it easier to go to Bali. From Bali, flight to Jakarta is about 1.5 hours, to Singapore and Perth (Australia) 2.5 and 3 hours, to Hong Kong about 4.5 hours, and to Sydney/Melbourne about 5.5 to 6 hours, with various airlines offering their services. Just make sure you look for “Denpasar (DPS)” instead of “Bali” in airline time tables. It is the capital of Bali. Or you can check your “Travel Agents” for more travel arrangements and accommodation.

Most international visitors are able to fly to Bali directly.

ICESTI 2019 is the flagship conference and is organized by:

We are welcoming you to submit paper in this conference... on 30 Mar 2019
Read Full story »